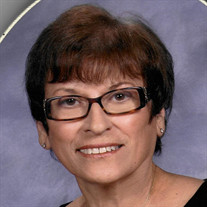 With the deepest of sadness and heavy heart, the family of Sylvia Karas (nee Geanneses), of Westlake, Ohio, announce that she passed away suddenly on July 24, 2021, at the age of 76. She has been reunited with her beloved husband, Stefos Karas. Sylvia (Mina to her siblings) will be lovingly remembered by her sons, Art (Éva), Leon (Grace); daughter, Cassie Zwart (David); brothers William, Anthony; sisters Bessie Ermidis (Victor, deceased), Ellie Perioris (Strat), and Antonette; as well as too many to individually name of nieces, nephews, cousins, godchildren, and friends throughout the United States and Greece. She was a loving Yiayia who affectionately spoiled her grandchildren, Asymina, Mina, Xander, Ana, Stefo, Alexa, Andrea, Steve, and Ariana, with her traditional baking of Greek pastries and cookies, and giving the best hugs. Sylvia was born in Cleveland, Ohio, on August 11, 1944, to Leonidas (Louie) and Anna (nee Kamenos) Geanneses. She attended John Adams High School, studying Accounting/Business. As part of the Delfinos group, Sylvia would “hang out” with her school friends at Canteen on a Friday night at East End Neighborhood House. After graduation from high school in 1963, Sylvia began her career at the Cleveland Trust Bank. She continued in the accounting field until her marriage on June 7, 1970, for a loving partnership of 36 years to Stefos (who preceded her in death). Sylvia took an active part in every aspect of her Greek heritage. She was a member of the Maids of Athena, took pleasure in Greek dancing, and traveling to Greece on many occasions. She was a longtime member of both St. Paul’s and St. Demetrios Greek Orthodox Churches, and a member of the St. Paul’s Ladies of Philoptochos, and Daughters of Penelope Erinys Chapter 355. In her spare time, Sylvia volunteered as the Treasurer at the Parish Library of St. Demetrios, she volunteered at the St. Paul’s Greek Orthodox Festival, co-founding the Ice Cream Baklava Sundae booth, supporting the jewelry booth, and extended her creativity by designing flower arrangements at the Fairview Hospital Flower Shop. Sylvia was the “try anything,” “go anywhere” Yiayia, always looking forward to the next adventure. She stayed active throughout her life completing two marathons, and remained fit with her daily pilates and walks to prepare for the next venture with her family. Although Sylvia never wanted to be the center of attention, she was the bedrock of her family. She listened with compassion and confidence, always sharing her wisdom without judgment. Sylvia held an endless love and support for everyone who was part of her life. Visitation Tuesday from 5-8:00pm at Yurch Funeral Home, 5618 Broadview Rd Parma, OH with Trisagion at 7:30pm. Funeral Service Wednesday, July 28, 2021 at 11:00am at St. Paul Greek Orthodox Church, 4548 Wallings Rd, North Royalton, OH 44133. Interment at St. Theodosius Cemetery. In lieu of flowers, our family requests a donation in her name to the St Paul Greek Orthodox Church.

With the deepest of sadness and heavy heart, the family of Sylvia Karas (nee Geanneses), of Westlake, Ohio, announce that she passed away suddenly on July 24, 2021, at the age of 76. She has been reunited with her beloved husband, Stefos Karas. Sylvia... View Obituary & Service Information

The family of Sylvia Karas created this Life Tributes page to make it easy to share your memories.

With the deepest of sadness and heavy heart, the family of Sylvia...

Send flowers to the Karas family.