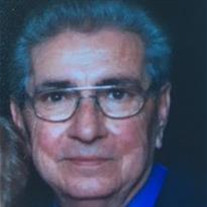 Mihail Marangos, beloved husband of Zambia (nee Mavrakis). Loving father of Maria Marangos and Donna (Michael) Delis. Grandfather of Jacob and Emily. Brother of Eleni Eftixidou, Nikos, and Kostas. Uncle to many beloved nieces and nephews. Mihail (Michael) was born in Athens Greece in 1936 where he grew up. In Greece, he played semi-pro soccer making it to pro-level his last season for Team Apollon. Afterwards, Mihail served in the Greek Army. He finished his college degree in Technical Engineering, trained to work on aviation, railroad, and all modes of common transportation engines, finishing top of his class. Mihail married the love of his life, Zambia (Zozo) from Chania, Crete in 1964. Together with their two young daughters, they immigrated to the United States in 1973. They built a life for themselves in Cleveland Ohio where he served on the Board of Sts. Constantine and Helen Greek Orthodox Cathedral (1981-1983). In his retirement, he and Zozo moved to Bradenton, Florida in 2000. While in Florida, Mihail spent his days fishing, watching NBA Basketball, connecting with the Greek community and spending time with their dear friends. He and his wife recently moved back to Cleveland to be closer to their family. Mihail had an unwavering love for his family, faith and Greek heritage. When he spoke of his grandchildren, Jake and Emily, he beamed with pride. His grandchildren will dearly miss their Papou. The family would like to thank the nursing staff of Hillcrest Hospital’s ICU and Hospice units for their impeccable nursing care during Mihail’s final days. VISITATION MONDAY, NOVEMBER 27, 2017 at 10-11 AM, with FUNERAL SERVICE at 11 AM. All services at Sts. Constantine and Helen Greek Orthodox Cathedral, 3352 Mayfield Rd. Cleveland Heights, OH 44118. Interment Knollwood Cemetery. In lieu of flowers, contributions may be made to Sts. Constantine and Helen Philoptochos. www.yurchfunerals.com

The family of Mihail Evdoras Marangos created this Life Tributes page to make it easy to share your memories.

Send flowers to the Marangos family.