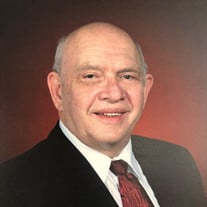 Michael Angelo Frangos, 77, of Pepper Pike Ohio, passed away peacefully, surrounded by his loving wife, Sons Steven and Nickolas, and immediate family, on Friday, February 2, 2018 at the Holy Cross Hospital, In Ft. Lauderdale Florida. Born in McKeesport, Pennsylvania to Steve and Irene Frangos, he lived most of his life in Cleveland Ohio. Michael was both a powerful and passionate man who had a zest for business. He is best known as the founder of Rascal House in Cleveland Ohio. In his spare time, he enjoyed family and friends, cracking jokes, constantly thinking of new ways to promote and grow his business, and lately he took delight in playing iPad games and bonding with his youngest grandchild, only grandson, and namesake. Michael was very loving, kind, and extremely proud of his two sons, Steven (Liz) and Nickolas (Tamar), as well as all of his grandchildren, Maria, Ashley, Jasmin, Madison, Michael, and his two great grandsons, Ivan and Owen. He is also survived by his wife, best friend, and the love of his life of 55 years, Filoula (Panagiotakis) Frangos, sisters, Harriet Frangos Vakos,(Bob deceased) Mary Frangos Pontikos, and brothers, Louis(Ann), and Gus Frangos,(Christie), and Damon (deceased), sister in law, Annoula Regas,(George deceased) daughter-in-law Kathy Borovic Frangos, as well as his many loving nieces, nephews, cousins, and other family and friends. A veteran of the United States Army. The family will receive guests on Friday February 9, 2018 from 4-8 PM at Yurch Funeral home, 5618 Broadview Rd. Parma, OH 44134. Trisagion Service 7:30 pm on Friday. Visitation also on Saturday February 10, 2018 at the Sts. Constantine and Helen Greek Orthodox Cathedral 3352 Mayfield Rd. Cleveland, Ohio 44118 from 11-12 PM followed by the Church service at 12 Noon. In lieu of flowers the family asks that donations be made to the Irene Frangos Endowment Fund for Cancer research: Cleveland State University Foundation 2121 Euclid Ave, UN 501 Cleveland OH, 44115, which was established by Michael, or to his Church, Sts. Constantine and Helen Greek Orthodox Cathedral (address above.) www.yurchfunerals.com

The family of Michael Frangos created this Life Tributes page to make it easy to share your memories.

Send flowers to the Frangos family.