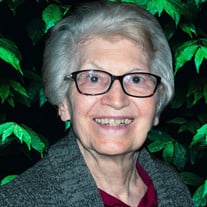 Dr. Mary Petrelli was born in Africa in the city of Wad Medani, Sudan, located on the west bank of the Blue Nile River. When she was two years old, her family moved 85 miles (136 km) north to Khartoum. She was the youngest child of Kleanthis and Chrissi Petrelli, both from Mytilene, Greece. Her father went to Sudan as a young man working as a trader, probably following the British army. Her mother was sent as a young child to live with relatives to escape widespread economic devastation in Greece. All the couple’s children were born and raised in Sudan: Myrna (George) Economou, Nikki (Nicholas) Neophytos, Sophia (Andrew) Millett, Antoni (Anthi) Petrelli and Mary Petrelli. All eventually moved to Athens, Greece, except for Sophia who relocated to England and Mary, who eventually moved to Cleveland, Ohio, by way of London. The exodus from Khartoum followed after Sudan gained its independence from the British Empire in 1956. Mary and her sisters matriculated through the Khartoum Greek School, which was operated by the Greek Ministry of Education. Mary also spent several years at the English-run Unity High School in Khartoum where she obtained the Cambridge Certificate, which qualified her to enter the Khartoum University Medical School associated with the University of London. She graduated in 1959. She served a one-year internship in the local teaching hospital, which required her to learn Arabic, then moved to London where she completed her residency in Anatomic Pathology, with the last two years at the Royal Free Hospital with Prof. Peter Scheuer and Dame Sheila Sherlock. In 1967, she was appointed as a member of the Royal College of Pathologists, England. In 1967, Mary came to Cleveland as a fellow on a Public Health Service Graduate Pathology Training Grant to study Transmission Electron Microscopy and to do liver research with Drs. R. Stenger and J.D. Reid at the Cleveland Metropolitan General Hospital (now the MetroHealth Medical Center), a teaching hospital affiliated with Case Western Reserve University. After one year’s research as a fellow, she was invited to join the MetroHealth staff in Anatomic Pathology, with expertise in liver and gastrointestinal diseases and electron microscopy. Mary’s professional accomplishments were many. Among them, she held an NIH grant from 1974 to 1976 to study “Spontaneous Mouse Hepatomas and latent MHV Infection.” From 1988 to 1995 she served as Associate Professor of Pathology CWRU Pathologist at MHMC - Head of GI and Liver Pathology and EM Laboratory. Following her retirement in 1995, she continued as a volunteer guest lecturer until 2005. She was a member of a number of pathology and medical associations and served as president of the Cleveland Society of Pathology (1988-1989). The monthly meetings of all pathologists in the Cleveland area -- which she helped organize -- was named in her honor as the Mary Petrelli Pathology and Gastroenterology Conference. The highlight of her medical career was teaching generations of medical students and interacting with staff. Mary joined the Sts. Constantine and Helen Greek Orthodox Cathedral Parish in Cleveland Heights soon after her arrival in Cleveland, primarily, she said, because of the homilies delivered by the Dean of the Cathedral, Fr. Robert Stephanopoulos. In subsequent years, she assisted the Greek School teachers at the school of the Annunciation Greek Orthodox Church in Cleveland by working with students on conversational Greek. She was a member of the Philoptochos Chapters of both Sts. Constantine and Helen Cathedral and the Annunciation Church and served as a board member of the Annunciation Philoptochos. During the early 1980s, while she was attending a meeting of the Hellenic University Club, she was nominated for election as secretary. When she declined because she was not confident in recording the minutes in English, a voice declared, “I’ll help you with the minutes.” Those fateful words were spoken by Mike Vasilakes, and the rest is history. Mary Petrelli and Mike Vasilakes married in 1990 at the Agia Paraskevi Church in Athens, Greece. Mary died a week shy of their 31st anniversary. She once said, “Mike’s family has embraced me and loves me beyond one could ever wish. Mike’s daughters, late mother (Argero Vasilakes), and late sister (Grace Pasiadis), as well as his friends, all took me to their bosoms and have expanded my circle of acquaintances so beautifully. Mike’s extended family in Greece (what an extraordinary group of people!) have also welcomed me into a family I give thanks for every day.” Mary is survived by her husband, Mike (Manuel P.) Vasilakes, stepdaughters Argerie Vasilakes (Paul Landefeld Jr.) and Antonia (David) Gates, granddaughter Amanda (Randy) Kuhrt, sister Sophia (Andrew) Millett, and nephews Peter (Anna) Millett, Nicholas Millett, Kleanthis (Nikoleta) Petrelli, Panagiotis Petrelli, Nearchos (Yette) Economou, and Kritos (Irene) Neophytos. Services will be on Tuesday, June 1 at Sts. Constantine and Helen, 3352 Mayfield Rd, Cleveland, Ohio 44118: A viewing at 10:00 a.m. and funeral at 11:00 a.m. will be followed by a luncheon. A private interment will be held at Saint Theodosius Cemetery in Brooklyn, Ohio. In lieu of flowers, the family requests that contributions be made to the Sts. Constantine & Helen Philoptochos at 3352 Mayfield Rd, Cleveland, Ohio 44118, or the Annunciation Greek School at 2187 W. 14th St, Cleveland, OH 44113. Participate virtually at 11:00 Eastern time with Livestream on the Saints Constantine and Helen YouTube channel here: https://www.youtube.com/user/stsconstantine

Dr. Mary Petrelli was born in Africa in the city of Wad Medani, Sudan, located on the west bank of the Blue Nile River. When she was two years old, her family moved 85 miles (136 km) north to Khartoum. She was the youngest child of Kleanthis... View Obituary & Service Information

The family of Mary Petrelli created this Life Tributes page to make it easy to share your memories.

Dr. Mary Petrelli was born in Africa in the city of Wad Medani,...

Send flowers to the Petrelli family.