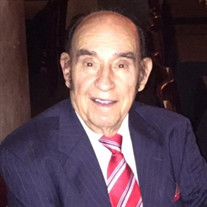 John A Karras was born in Nafpaktos, Greece on March 7, 1920 and passed away peacefully surrounded by his loving family on September 6, 2021. Beloved husband of Ismini (nee Tsardoulias) of 66 years. Loving father of Vaso Karras-Stefanos (Joseph), Liza J. Bosinger (Pete), and Adam J. Karras (Jacqueline). Grandfather of Richard (Beth) Wolf, Kristina McGuire, Koli (Thomas) Storer, John-Ryan (Quinn) Stefanos, John A. and Nikolas Karras. Great Grandfather of John and Maxwell Wolf, Kaia and Leonidas McGuire, Jameson and Kellan Storer. Son of the late Adam and Vasiliki. Brother, uncle, cousin, and friend of many. John was a veteran of the Greek Air Force and fought against the Germans during World War II. He was a part of the military until 1946. John A Karras married his wife Ismini in Athens Greece on July 31, 1955. John A Karras came to the United States September 1955. Ismini followed a year and a half later (with their daughter Vaso) joining John in the United States. John and his wife received tutoring lessons in order to become United States citizens as soon as they were eligible to. They lived in the Cleveland area since the mid-50s and moved to Brook Park in 1974. Where they still live today together independently with each other. John A Karras is a member of the Annunciation Greek Orthodox Church on West 14th. John served as president, vice president and treasurer of the church as well as on the council. John was instrumental in starting The Greek school program at the Annunciation Greek Orthodox Church. He also served as chairman of the Greek school for a number of years. John made sure that his children were always active in church. They attended Greek school where they learned to speak, read and write Greek and learn about their heritage. John A Karras is a founding member of the Nafpaktian Cultural foundation as well as past president of that organization. John A Karras is still the proprietor of Karras Barbershop and Parma since 1968. He currently held an active barber’s license. John cut hair until he was 95 years old. John is a 32nd degree Mason and a past president of the Al Koran Shriners and Shriners International, he is also a member of the Kentucky colonel’s and the Parma elks. John A Karras spent his years in America working hard for his family and volunteering for numerous organizations for which he has been recognized. He loved being a citizen of the United States of America and lived by the phrase “God bless America”. VISITATION SUNDAY from 2:00-8:00PM at YURCH FUNERAL HOME, 5618 Broadview Rd. Parma, OH 44134. MASONIC SERVICE at 6:30pm and TRISAGION SERVICE 7:30PM. VISITATION MONDAY SEPTEMBER 13, 2021 from 10-12 at ANNUNCIATION GREEK ORTHODOX CHURCH, 2187 W. 14th St. Cleveland, OH 44113. FUNERAL SERVICE TO FOLLOW at 12 NOON. Interment St. Theodosius Cemetery.

John A Karras was born in Nafpaktos, Greece on March 7, 1920 and passed away peacefully surrounded by his loving family on September 6, 2021. Beloved husband of Ismini (nee Tsardoulias) of 66 years. Loving father of Vaso Karras-Stefanos (Joseph),... View Obituary & Service Information

The family of John A Karras created this Life Tributes page to make it easy to share your memories.

Send flowers to the Karras family.