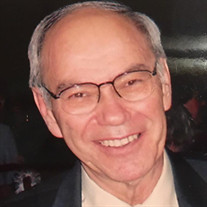 Henry “Hank” Putre, 80, lived a life filled with resourcefulness, building and fixing things, creativity, love of nature and devotion to family. He came from humble means, growing up during World War II in Central Europe when food was scarce. But he spent a lot of time outdoors and made up games with his sisters. As a kid he found joy in small things like a pet goat, a little wagon that he got so caught up in playing with that he forgot to go to school one day, and picking wild blueberries on the hillside. When Henry was 10, he immigrated with his mother, Maria, father, Henry, and sisters Erica (m. Albin Kramer) and Marlene (m. Erwin Preditsch) to the United States to live with relatives in Cleveland. They settled in the Kinsman neighborhood, where he was nicknamed “Skeeter” by the neighborhood kids and his cousins, for his enthusiasm and fast running. Henry was second in his class at Benedictine High School and graduated from Fenn College with a bachelor’s of engineering science, then went on to Cornell University on full scholarship, graduating with a master’s degree in mechanical engineering. He was president of his senior class and his fraternity, Sigma Tau Gamma, at Fenn (now Cleveland State). He worked in jet propulsion at NASA Lewis Research Center in Cleveland during the Space Race of the 1960s. In his spare time, he worked on his 1962 red Corvette, which he would later relinquish for a sensible Dad car. In 1965, Henry met Carol Fuduric at a dance mixer and was instantly smitten with her fun-loving spirit and her cute good looks. He asked for her phone number and she said, “It’s in the book.” He found it, and the rest is history. They were married at St. Paul’s Church in Euclid and were devoted partners for 53 years, having lots of fun camping, swimming, dancing, going on bike rides and raising two children, Laura and Michael (m. Meghan Crockett). Henry was a devout Catholic and a member of St. Columbkille Church in Parma and the Gottscheer Club in Russell Township. When NASA discontinued its nuclear program in the early 1970s, Henry became a project manager for the llluminating Company. His work included managing construction for the Perry Nuclear Power Plant. Henry was able to retire early. He and Carol loved going to Nokomis, Florida, for at least a month every winter, where they spent lots of time on the beach, socializing with new friends, playing tennis and ping pong, watching birds (he loved all animals but especially birds) and exploring the state. In addition to his wife, children and siblings, Henry leaves behind four spirited granddaughters, Jane, Morgan, Maya and Molly, ages 3 to 13. He was a hit with the girls as he loved to play T-ball, do science projects, build playhouses out of cardboard and sing songs. He was "Uncle Hank” to seven nieces and nephews. Henry passed away at Metrohealth Medical Center on March 18. His cheerfulness, intelligence and gentle nature will be missed by many. Memorial to follow at a later date. In lieu of flowers, donations may be sent to the Alzheimer’s Foundation or Catholic Charities of Cleveland.

The family of Henry "Hank" Putre created this Life Tributes page to make it easy to share your memories.

Send flowers to the Putre family.