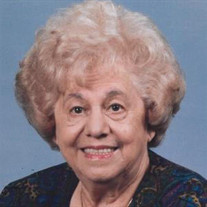 Helen Vrettas of Cleveland Heights, Ohio died on Friday, November 28, 2014 at her home of 54 years. She was 101 years old. Helen was a restaurateur for over 30 years and active in her church community for many years well into retirement. Helen was born on March 1, 1913 in Muskogee, Oklahoma. She was the third of 8 children of Peter and Anastasia Scocos, including siblings Katherine, Kiki, Jenny, Dena, Chris, Kassiani, and Litsa. In 1924 the family moved to Greece, their native country, where Helen later attended schools in Athens. Helen returned to America in 1939 and joined other family members in Cleveland, Ohio. That same year she met and married Thomas A. Vrettas (deceased) and moved to his home in Green River, Wyoming – where together they owned and operated the well-known Red Feather Café for over 20 years. They had three children, Arthur, Peter, and Frank. In 1960 Helen and Tom returned to Cleveland where Helen operated the Mecca Restaurant and Tom operated the Superior Bar in Cleveland for over a decade. During retirement Helen served as an officer of the Daughters of Penelope of Sts. Constantine & Helen Greek Orthodox Cathedral and assisted with countless dinner events to support charitable causes. In addition, she has been honored with articles about her life and recipes in the Cleveland Plain Dealer and the Sun Press over the years. An extraordinary woman, Helen was very caring and generous to others, always there to give a helping hand. She was also noted for her many colorful stories about her family and her restaurant days. An accomplished chef – at restaurants, community gatherings, and family affairs – Helen has prepared meals and pastries for thousands of people over a 70-year span. She and her famous dishes will be greatly missed. Helen is survived by her sons and daughters Arthur & Elena Vrettas, Peter & Sharon Vrettas, and Frank & Debra Vrettas. She is also survived by her sisters Emily (Litsa) Scocos (Cleveland, Ohio) and Kassiani Spanou (Athens, Greece); her grandchildren Thomas Vrettas (Detroit), Jenifer & Gregory Black (Eastlake), Melanie & Mohamed Kassem (San Diego), Anastasia & Michael Huelsman (San Diego), and Peter Vrettas (San Diego); her extended grandchildren Danielle Taylor, Kristine Weisman, and Ashley Easterday and their families; her great grandchildren Devin Black, Caitlin Black, Farris Kassem, Ryan Kassem, Kent Huelsman, and Gregory Huelsman; and her many beloved nephews and nieces in America, Greece, and England. A memorial service organized by Yurch Funeral Home will be held at DeJohn Flynn Mylott Funeral Home, 4600 Mayfield Road, South Euclid, Ohio (East of Green Rd.) on Thursday, December 4, 2014, 4pm to 8pm, Trisagion at 6pm. Funeral Services will be at 11am Friday, December 5, 2014 at Sts. Constantine and Helen Greek Orthodox Cathedral, 3352 Mayfield Rd. Interment will be at Lake View Cemetery, Cleveland Ohio. Memorial donations may be made in Helen’s name to the Sts. Constantine & Helen Greek Orthodox Cathedral Memorial Fund or Hospice of the Western Reserve.

Helen Vrettas of Cleveland Heights, Ohio died on Friday, November 28, 2014 at her home of 54 years. She was 101 years old. Helen was a restaurateur for over 30 years and active in her church community for many years well into retirement. Helen... View Obituary & Service Information

The family of Helen (nee Scocos) Vrettas created this Life Tributes page to make it easy to share your memories.

Send flowers to the Vrettas family.