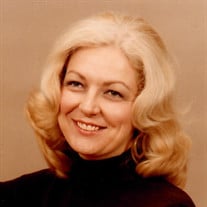 Helen L. Esque (Canterbury) of Cleveland, Ohio peacefully passed away on December 28th, 2018 at the age of 78. The world has lost a beautiful human being, as she greeted all with a warm smile, a sparkle in her eyes that radiated openness and kindness. Helen graduated with an Associate’s Degree in Business Administration. Helen worked at AG McKee, which turned into Davey McKee until its closing of the Cleveland office. But her favorite position was her work at the British Consulate, located in downtown Cleveland. During her tenure there she was exposed to many important import and export trade deals including those from Ireland. Helen loved music, all types of music. The house was always alive with various genres depending on her mood. Her favorite was Jazz. She supported the Cleveland Jazz scene and you would often find her down at the Mardi Gras on Friday night with her Daughter Cher, listening to local talent. Helen was a very compassionate person always meeting other people’s needs before her own. She was a devoted contributor to the Salvation Army, City Mission and Habitat for Humanity. Her love for animals drove her to contribute monthly to the ASPC. Her passion for human rights had her contributing to the Civil Liberties Union. She loved literature and the arts. Coming from humble beginnings, her desire for knowledge turned her into an avid reader of various subjects and genres. She loved words and had a large dictionary and a thesaurus always on hand. She loved to discuss what she read with her friends and family. Helen would always buy books for herself and her family. Helen loved fashion and had exceptional style and taste. She would spend many hours with her girls taking them shopping downtown and to various malls around town. Many happy days were spent shopping the major department stores with her. She also enjoyed many special visits to Kent State Fashion Museum commenting and appreciating the great designers of the past. During the 70’s she was active in the women rights movement. She taught her young women to be strong and independent. She taught them the importance of being able to take care of themselves financially, physically and survive on their own two feet. She gave them strength and the tools to compete in a “man’s world”. In a show of her beliefs in equality, back in the 70’s, she walked up to customer service desk at a major department store and asked for her credit card that stated “Mrs. Eugene Esque” to be changed to “Helen Esque”. She made them change it with some effort. Small victories make for bigger victories. Helen was loyal to her family and friends. She would be there for them at a time of crisis or just a friendly chat. When her own mother became ill with vascular dementia, she would drive down to Ashland KY every 28 days to stay with her to take care of her for 1 week. She did this for 7 years, not ever missing her turn. If her time fell on a holiday, her husband and her girls would go down to spend it with her and her mother. She was very proud of this accomplishment, as at times it was hard on her and her health. It is a testament of her strength and character. Helen continued to visit her mom after she had to be admitted into a nursing home, as it became impossible to care for her at home. Helen lived a healthy lifestyle. She was proud that she did not take any medication nor had any health problems. She believed in eating healthy foods and exercising. She joined golds gym and worked out with the weight lifters. This was before “going to the gym” was popular. She would walk 5 miles a day, even in the rain and snow. She was always ahead of her time. Helen faithfully got her yearly physicals and mammogram’s. Unfortunately she was found to have breast cancer in 2007 and during this time she also was found to have lung cancer. Being a non-smoker it was devastating news but Helen battled them both and beat the odds. By 2009 she was Cancer Free. In 2010 her beloved husband Eugene Edwin Esque passed and it broke her heart. In 2011 she was diagnosed with breast cancer again all the while battling dementia and Interstitial lung disease. Helen continued to fight to become cancer free. However, the Dementia and Interstitial Lung Disease remained in 2012. Helen continued her daily walks around the neighborhood with her beloved companion, Sugar. Once she got home, she would read the Plain Dealer. Those were the two main stays that keep her going! Helen was preceded in death by her loving husband and companion Eugene, whom she loved since she was 16 years old. She is survived by her daughters Kimberly Esque-Marino (husband David), Cherie Renee Esque and her loyal companion Sugar, who never left her side. Helen was the oldest of 3 sisters and 3 brothers of Ashland, KY. Helen wished to be cremated with a small private service. We would enjoy hearing your special stories and shared experiences with Helen over the years. You can share them with us on this web site or contact the family.

Helen L. Esque (Canterbury) of Cleveland, Ohio peacefully passed away on December 28th, 2018 at the age of 78. The world has lost a beautiful human being, as she greeted all with a warm smile, a sparkle in her eyes that radiated openness and... View Obituary & Service Information

The family of Helen Lucile Esque created this Life Tributes page to make it easy to share your memories.

Send flowers to the Esque family.