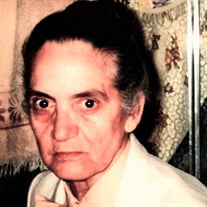 PAPPAS, Georgia (née Kassiou) Born February 8, 1926, Lykoporia, Greece. Died May 5, 2018, Dayton, Ohio. Preceded in death by husband Steve Pappas; survived by daughter Maria (Keith) McFarland, son Nickolas (Barbara) Pappas, and granddaughters Sabina, Sophia, Stavroula, and Georgia. Georgia Kassiou was born in a village on the Corinthian Gulf of Greece’s Peloponnesian Peninsula. In 1951 she followed her sister Sophia Moutsopoulou to Cleveland, where she would live until declining health compelled her to move to Dayton with her daughter Maria. Georgia met Steve Pappas in Cleveland and married him in 1957; he died in 1994. During all those years there was the Greek School at Annunciation Greek Orthodox Church, where Georgia started teaching children Greek language and culture in the early 1950s, continuing until her very reluctant retirement in 2012. (It is now known as the Georgia Pappas Hellenic Cultural School.) By the 1970s Georgia started having younger students whose parents she had taught; later she taught her early students’ grandchildren. During a tribute to the Greek School in February 2012, one speaker said “We have to separate the history of our Greek School into two periods, ‘The time before Mrs. Georgia’ and ‘The time of Mrs. Georgia.’” VISITATION THURSDAY, 5-9 PM AT YURCH FUNERAL HOME, 5618 BROADVIEW RD., PARMA; TRISAGION AT 7:30 PM. FUNERAL SERVICE 11 AM FRIDAY, MAY 11 AT ANNUNCIATION GREEK ORTHODOX CHURCH, 2187 W 14 STREET, CLEVELAND. INTERMENT FOLLOWS AT ST. THEODOSIUS CEMETERY. In lieu of flowers, donations are appreciated to the Georgia Pappas Hellenic Cultural School of Annunciation Greek Orthodox Church.

The family of Georgia Pappas created this Life Tributes page to make it easy to share your memories.

Send flowers to the Pappas family.