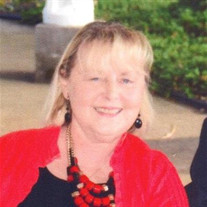 Daria Darlene Petrykowski (nee Dobos) fell asleep in the Lord on 21 July 2017 surrounded by her loving family. Born in Lorain, Ohio to her parents, Julius and Margaret (Tomcho) Dobos, she lived in South Lorain where she attended Oakwood Elementary, Whittier Junior High and Lorain High School. She was a graduate of the Class of 1959-A and received a Bachelor’s Degree from Baldwin Wallace College and a Master’s in French from Middlebury College, Vermont. Darlene taught French and math for Olmsted Falls High School. Her love of God and her Church were the center of her life. She was a member of Holy Trinity Orthodox Church, Parma, Ohio where she sang in the Choir, served on Parish Council, and was a member of the Women’s Club, founded and operated La Coupole, and volunteered countless hours of her life. Daria was a consultant to the Orthodox Church in America’s Department of Religious Education and served as a Diocesan Council Member. Her enthusiastic approach to volunteering was recognized with the International Orthodox Christian Charities' Diane Zamiska Award. In addition, Daria was on the Board of Directors of Zoe for Life. Daria is survived by her beloved husband of 51 years, Jerome, of Strongsville; sister Dia Dobos, brother Donald (Connie) Dobos, brother David (Kathleen) Dobos, brother-in-law Jack (Sharon) Petrykowski. She is also survived by 13 Godchildren, 5 nieces and a nephew, and many great nieces and nephews. In addition, she is survived by many relatives in Bajerovce, Slovakia, her Grandmother’s ancestral village. She was pre-deceased by her sister-in-law Carmel. Visitation will be at Holy Trinity Orthodox Church, Parma, Ohio on Tuesday 25 July from 4 to 8 PM with a Parastas at 7 PM. Her funeral service will be at 10 AM on Wednesday, 26 July. The Very Reverend Alexander Garklavs will officiate with responses by the Holy Trinity Choir. Burial will be at Saint Theodosius Cemetery, Brooklyn, Ohio. The family suggests memorial contributions may be made to Holy Trinity or to Zoe for Life. May God accept her soul as she looks for the resurrection of the dead and the life of the world to come. Memory Eternal, Daria. www.yurchfunerals.com

Daria Darlene Petrykowski (nee Dobos) fell asleep in the Lord on 21 July 2017 surrounded by her loving family. Born in Lorain, Ohio to her parents, Julius and Margaret (Tomcho) Dobos, she lived in South Lorain where she attended Oakwood Elementary,... View Obituary & Service Information

The family of Daria "Darlene" Petrykowski created this Life Tributes page to make it easy to share your memories.

Send flowers to the Petrykowski family.