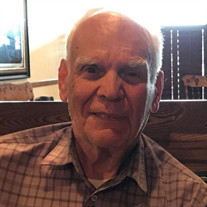 Anastasius “Ernie” Fourmas born on September 1, 1932 in Cleveland, Ohio to the Late Tom Fourmas and Frances Fourmas. Beloved Husband of Rita (nee Peters) of 54 years. Loving father of Tom Fourmas of Broadview Heights, Ohio. Cherished brother of Tula Ladopoulos. Caring uncle to many nieces and nephews. All services will be at St Paul Greek Orthodox Church, 4548 Wallings Road, North Royalton, Ohio 44133 on Saturday December 5, 2020. Visitation 10-11am with Funeral Services to follow at 11am. Interment St. Theodosius Cemetery. Memorial contributions may be made to the St. Paul Greek Orthodox Church Capital Improvement Fund. Ernie was a proud graduate of West Technical High School in Cleveland, Ohio where he was a member of the AV club, student council and a tackle on the football team. After high school, Ernie proudly served his country in the United States Army as a member of the U.S. 7th Army, Army Corp. of Engineers in West Germany. Being honorably discharged from the U.S. Army, Ernie attended and graduated from John Carroll University with a Bachelor of Science degree and later received his M.A Ed. From Cleveland State University. After graduating from John Carroll, Ernie was hired by the Cleveland Public Schools and taught social studies, US civics and speech and later advanced to be a principal. He touched the lives of thousands of students during his 35-year tenure at the following schools: Patrick Henry Junior High, Collinwood High School, Lincoln-West High School, Lincoln Junior High, Newton D. Baker Junior High and Whitney Young Junior High. All that knew Ernie knew his love of his profession and his pursuit of educating our youth was paramount. On November 20, 1966, Ernie married the “love of his life” Rita Peters of Pittsburgh, Pennsylvania. A year later they welcomed their son Tom Fourmas into the world. Everyone who knew Ernie knew how proud he was of his family and the immense love he had for them. They meant the world to him. Ernie was a devoted member of St. Paul Greek Orthodox Church, since its establishment. He served as a Sunday school teacher and was a former member of the Parish Council. His faith and love of Christ was center of his life. In addition to his educational profession, Ernie served 42 years on the Board of Directors of the Ohio Educational Credit Union. His passion for education carried over to finance as he was passionate about extending good financial opportunities to his fellow educators through the Credit Union. Ernie also had a passion for Cleveland history, and theaters. In his spare time, he was a theater projectionist and a member of the Projectionist Union. Truly a remarkable man, with a smile on his face to all he met and passion in his heart. One said of him,” Once God made Ernie, God broke the mold…” He will be missed by all. Ernie, job well done!

The family of Anastasius "Ernie" Fourmas created this Life Tributes page to make it easy to share your memories.

Send flowers to the Fourmas family.